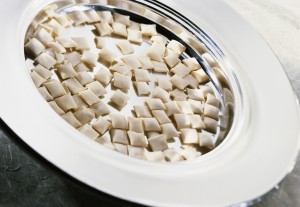 If you have food allergies or intolerance in your family, you know how complicated ordinary events can become.  I’m not going to get into the horror of birthday and Christmas parties.  You just have to be prepared.  I’ll leave it at that.  However, there was one event I used to never be prepared for.

Communion.  Arg.  Half our family is either gluten intolerant or has celiac disease.  No wheat flour for us.  And that means no communion wafer.

I’ve taken different stances in the past.  I used to just eat the thing and hope that God would preserve me from illness.  Then I realized just how sensitive I am to gluten.  I’m bothered by cross contamination.  There’s no way I would willingly put a traditional piece of bread in my mouth.  I debated that while God could keep me safe if he wanted to, I also had the responsibility to use my knowledge and to not intentionally do things to test him.  It’s not exactly the same thing as throwing yourself off the temple and hoping angels will catch you, but we’re getting on the same territory.

So what is one to do?  You could just skip that part I guess- but that wasn’t the best answer for me.  If one remembers it’s communion Sunday, one could bring their own piece of bread.  I would go with a corner off some gf toast, but I hear you can actually order gf communion wafers (for those who take communion frequently enough to make it worthwhile).

Unfortunately, the last time we had communion, I forgot.  I forgot what Sunday it was.  I forgot to bring a substitute piece of bread.  I forgot- well, lots of things.  It’s been a busy month.

I figured a piece of chocolate wouldn’t quite do.  Nor would a raisin.  Too close to the juice.  Hmmm.  I had a wrapper to a LARA BAR, but no actual bar to be found…. Ah ha!   Perfect! I found some almonds.  I was going to have a communion almond.

The communion almond actually worked really well.  I may use it again next time.  Very packable, and almost always to be found in my bag.  And I learned a very important lesson from it.  In the few seconds where I was desperately digging for a wafer substitute, my mind was racing with thoughts of, “What will people think if they see…?”  But that’s not what communion is about.  Communion is not about the externals, it’s about the internals.  It’s about us communing as a church body, yes.  It is also about us communing with God.  Making sure our hearts are right.  That we have no sins getting between us and God that we refuse to recognize.  It’s about remembering Christ’s sacrifice.  It’s about looking forward to communing with him, face to face, in heaven.

So.  If I hadn’t found the almond, I doubt anyone would have been paying enough attention to me to notice I didn’t crunch a cracker at the right time.  It wasn’t about me, anyway.  It also wasn’t about the “rules” or the “law”.  I was reminded of a very important passage in Romans, that we should all take to heart.  It sums up the matter at hand.