Annie Beth Donahue is the founder of Signposts Ministries. She is the mother of four children, each of whom have special health needs. This mini-interview is a heart-to-heart with the gifted person who’s been behind SPM from the beginning. 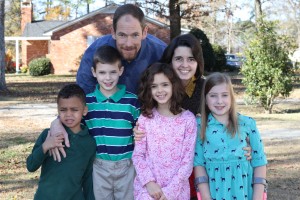 Why did you initially start Signposts?

First, God set the stage by giving me four children- all with special health needs. (Two are biological and two were adopted, so we can’t really blame it all on genetics.) Between my four children, we’ve seen a variety of doctors and therapists. We’ve worked with our local “Birth to 3” program. We’ve gone into the public Exceptional Children’s programs. And, off the top of my head, I’m guessing we’ve had at least 20 surgeries or procedures, almost as many ER visits, and one phone call to the nurse that ended with “hang up and call an ambulance.”

Given the variety of problems we’ve had, I found that I was able to meet almost anyone else in the special needs world and have at least one thing in common with them. Whether we bonded over special diets or physical therapy, there was always a connection. I also found that not everyone I spoke to had peace about their situation, and quite a few families didn’t have any support or know any other parents that were experiencing the same challenges. SpM was started to share hope and encouragement with families that are living with a special need- whether physical, mental, or emotional. God wants us to offer spiritual support and practical advice as well as tangible support.

What can you tell our readers about the founder of SPM? Background, where you’re from…?

Well, I’m from Washington, NC. No one in my family worked in the health care field. I really enjoy music, but didn’t want to major in performance or education. I chose music therapy as a way to serve others through a medium I enjoyed. I moved to the Charlotte area to attend Queens College (now Queens University). While in college, I met my future husband through the young adult activities at church. He’s actually a graduate of North Carolina State University, but he came home every weekend to the Charlotte area to work at his family’s greenhouse.

While pursuing my music therapy degree, I often worked with children with special needs. Originally, after graduation, I was going to go on and get my masters in Occupational Therapy, concentrating on the autism population, but I decided to get married instead. I graduated in ’02 and got married in ’03. Brad and I had our older son in ’04, adopted our older daughter in ’05, had another girl in ’07, and adopted our younger son in ’08.

If you could put it in a nutshell, what would you say is the primary goal — the single most important message you want the people who visit this site to know?

Thank you for sharing your heart, Annie Beth! You are an inspiration to many!