Sweet Stuff for Your Weekend 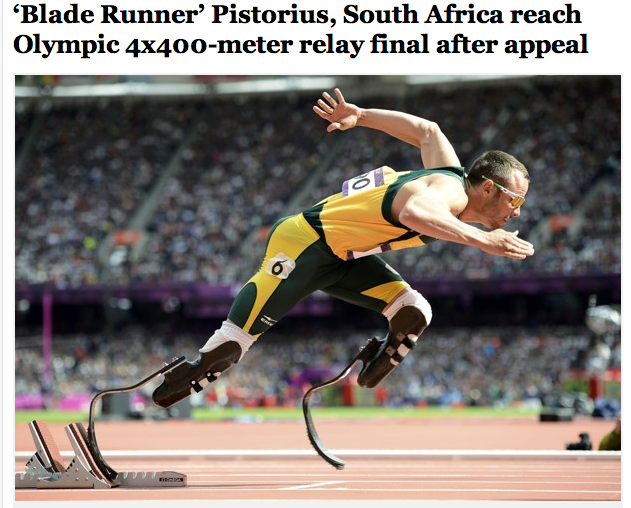 Sweet Stuff is an ongoing feature in the Signposts Community where we share uplifting and inspirational stories from around the web that put people with disabilities, or disability itself, in a positive light. Feel free to email us anytime if you have something to contribute!

One of our favorite Olympic moments was watching Oscar Pistorius, the ‘Blade Runner’ from South Africa compete in the “able-bodied” games for his country. People around the world have been inspired that they can overcome obstacles, and that anything’s possible. Pistorius was born without fibulas, and both his legs were amputated below the knee before he was a year old. This quote from a story in the Washington Post spoke volumes about the family that helped Pistorius grow into the legend he is today:

“Oscar knew growing up that he was different,” his father, Henk, told The Associated Press. “But he knew in competition with his friends, which we always encouraged, that he was differently abled. So we don’t talk about a disability. We speak about what is your different ability?”

“What is your different ability?” will be ringing in my ears for a long time now!

Adorable Valentina Guerrero has landed a high-profile modeling contract with a major fashion designer, at just 10 months old. Her gorgeous smile and bright eyes are making an even bigger splash because Valentina, dubbed the ‘new face of children’s swimwear’ is considered the first child with Down Syndrome to land a contract with a noteworthy fashion designer. Earlier this year, we shared the story about six-year-old Ryan Langstrom, another child with Down Syndrome, who featured in a Target circular modeling children’s clothing. We hope these limelight opportunities change some mindsets and perspectives!

A new play by acclaimed Canadian playwright Judith Thompson, called “RARE” debuted at the Toronto Fringe Festival on July 5th this year. It featured nine stars, all of whom have Down Syndrome. The performers share the stories of their lives, while navigating questions about human intelligence, the bias and obstacles they’ve faced and what makes life worthwhile. This unusual production sold out every performance in the festival and then featured in the “Best of the Fringe,” running from August 1st – 3rd. Click here to read more, and catch a video interview on CTV News with the playwright and one of the actors.

Hope you have a sweet weekend!