Psoriasis, What Happens When Skin Cells Mature Too Quickly 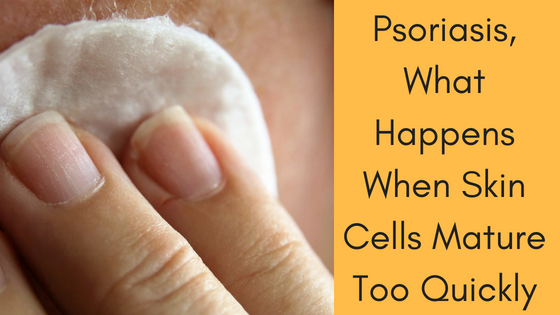 Psoriasis is not dandruff. The month of August is Psoriasis Awareness Month, so let’s get that off the table right away. Shampoo from the supermarket won’t do anything. We mention that first because of the roughly 20,000 children under 10 years of age that are diagnosed with psoriasis annually, it seems some are misdiagnosed due to confusion with other skin diseases.

While the causes of psoriasis are unknown, it is neither infectious, nor transferable from one child to another. Most researchers agree that the immune system is in some manner mistakenly triggered. This unfortunately speeds up skin cell growth cycles.

Under normal circumstances, a skin cell matures & then drops off the body’s surface in a 28 to 30-day range. But, skin affected by psoriasis takes only three to four days to mature and move to the surface. Rather than falling off, these cells pile up to form lesions. The skin is also found to become very red due to increased blood flow.

Symptoms include pitting and discoloration of the nails, severe scalp scaling, diaper dermatitis or plaques like those of adult psoriasis on the trunk and extremities.

Plaque Psoriasis is the most common form of psoriasis in children. It appears initially on the scalp as well-defined patches or plaques with a silvery-white surface.

Another type of psoriasis affecting children is guttate psoriasis. It is associated with several small, raindrop-like patches forming in large groups. When guttate psoriasis occurs in children and young teens, it is often the result of a secondary infection in the throat, like strep throat.

Steps to Get Relief from Psoriasis

There are reports that psoriatic disease sufferers have reduced their symptoms by altering what they eat, but there is no conclusive proof. On the other hand, logic dictates that a healthy diet contributes to a healthy body.

For example, children with severe psoriasis are more likely to be obese.  Even those with less-than-severe psoriasis are at a higher risk for developing heart disease and diabetes. This is where observing suggestions from the US Department of Agriculture come into play. The USDA has devised the My Plate Guide for a healthy, well-balanced diet. See this link for a full breakdown.

While there is no “cure” for psoriasis, treatments that have shown degrees of success include:

There are also alternative methods, such as soaking in Dead Sea salt baths, aloe vera and oat baths. But as every one’s body is different, a consultation with a physician should be undertaken to avoid possible allergic reactions or worsening rashes when using topical treatments.

Children with psoriasis are likely to have the condition for the rest of their life. Currently the disease affects as many as 7.5 million people in the U.S.

If you need additional info or counseling, there is a resource center established by the National Psoriasis Center. The Patient Navigation Center provides free and personalized assistance to anyone impacted by psoriatic disease, including families and caregivers. Contact it by email, telephone, text or on-line chat. You will be matched with a “patient navigator” who will help you find the info you need.

We want to end with a cautionary note about the major non-medical difference between an adult suffering psoriasis and a child. Peer pressure. We love our kids. But kids can be cruel to other kids. Emotional scars from bullying and ridicule of psoriatic disease symptoms could last a lifetime. When you are dealing with a child with this medical condition be sure to address emotional as well as physical needs.