Never Too Young to Suffer from Juvenile Idiopathic Arthritis 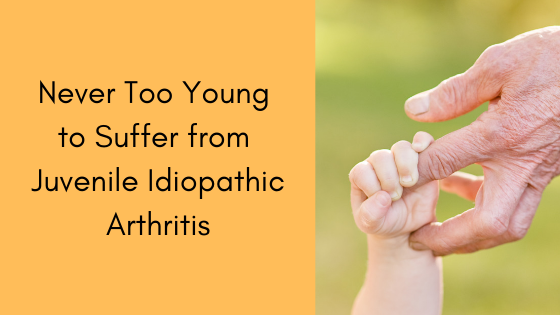 Juvenile Idiopathic Arthritis sounds like a misnomer. A mistake. How can a kid have creaking bones? Arthritis is more than something making it harder for the elderly to get around. It is a swelling (inflammation is the medical term) of the tissue that lines the inside of joints of over 300,000 children in the US, aged 16 or younger. The juvenile arthritis cause is unknown. Treatment involves both exercise and medicine.

Seven types of Juvenile Idiopathic Arthritis
Kids can start out showing no symptoms, which makes diagnosis difficult. At some point, there may be complaining of pain, swelling, and tenderness in the joints. Or complaints about a rash, fever, and blurred vision.

Locate a physician who will conduct tests to see if these are symptoms of juvenile arthritis or something else. The specialist will discuss in depth which one of these seven forms of Juvenile Idiopathic Arthritis your child may be suffering from.

Enthesitis-related arthritis is most common in boys age eight and above. The doctor will look to eyes, the spine, hips, and entheses (where tendons attach to bones) for damage.

Oligoarthritis attacks girls more than boys. It is also known as pauciarticular juvenile rheumatoid arthritis. The bad news is that it most commonly affects eyes, knees, ankles, and wrists. Good news is that many kids outgrow it as they reach adulthood.

Polyarticular arthritis, rheumatoid factor negative is also more often found in females than males. It strikes five or more body joints in the first six months of the disease (major among them jaw, neck, hands, and feet).

Polyarticular arthritis, rheumatoid factor positive most resembles adult arthritis. While it carries a higher risk of joint damage, it is one of the least common types.,

Psoriatic arthritis affects both girls & boys. And yes it is two diseases. But your child could have one for years before developing the other!

Systemic arthritis also doesn’t discriminate. It affects girls and boys equally. The entire body can potentially be under attack. From external rashes on arms & legs to internal organs, such as the heart, liver, spleen, and lymph nodes,

Undifferentiated arthritis is either none of the above or a mix. Sorry, can’t be more clear. It’s a term that the doctors apparently employ to cover as a catch-all.

Treating Juvenile Idiopathic Arthritis
Treatment is tricky because the cause is unknown. What doctors do know is that the problems revolve around an ineffective immune system’s response to telling the difference between the body’s own tissues and damaging germs. In other words, the immune system actually attacks and damages the body’s healthy tissues.

Depending on the age of the patient, the severity of the disease when diagnosed, and other determining factors, doctors will prescribe certain anti-inflammatory or anti-rheumatic drugs, along with possible physical therapy exercises.

And during all this, parents should keep an eye out for a burst of depression or anger. All this testing can be stressful for a young person. Try to keep your child looking for positive events in daily life.

Aggressive and early treatment will ensure that a child with Juvenile Idiopathic Arthritis can live a normal life and do most of the same things regular kids do.

July is Juvenile Arthritis Awareness Month. It is designed to salute the bravery, strength, and determination of these kids to fight juvenile arthritis.

Here in North Carolina, July 13 is specially designated as 2019 Juvenile Arthritis Day. It offers a chance to meet and network with other families who are affected by juvenile arthritis and share some of the same feelings, experiences, and concerns. It’s a time /place to exchange ideas, give & receive encouragement, make new friends and know you’re not alone. The activities take place at Marbles Kid Museum in Raleigh. For full details click this link.